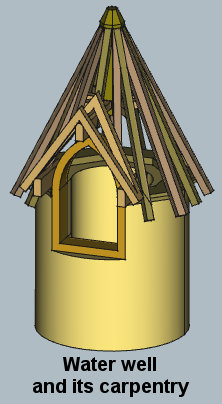 The example proposed concerns the restoration of the roof of a well, octagonal in shape, with a skylight over the opening, the frame of which is in the shape of a warhead.

We will see on this example a certain number of techniques which make it possible to best ensure the construction of a configurable model and its robustness.

The need is multiple :

- have an overall picture of the construction;

- edit plans for the manufacture of each component.

The project can be carried out

The series of body parts is as follows:
(hover over the image opposite to see the sequence of steps)

Same series of parts body but one part per file